CoPilot’s URL launch feature allows you to launch and manage CoPilot from another application on the same device.

URL launch is most commonly used with our CoPilot Standalone App as a way of automating the CoPilot login process; identifying which vehicle or driver is using CoPilot; and adding a button to CoPilot that sends it to the background and returns to the mobile app from which it was launched.

Depending on your implementation, URL launch can be used for a wide range of tasks and settings. Passing information to CoPilot via URL, you can:

Note: URL launch is only supported on our Truck licensed application.

Available in CoPilot 10.14 and Later with Account Manager Licensing Only

The Account Manager is a web tool that allows you to distribute and manage the product licenses your fleet has purchased for CoPilot Truck With ActiveTraffic. In the Account Manager, you can create lists of users (either vehicles, devices, or drivers), remotely distribute software licenses to those users, and then re-assign your licenses as needed when your devices or staffing change.

After the licenses are distributed, the CoPilot app itself is downloaded onto a device and requires a login. With URL launch, the login process is automated and drivers can open CoPilot and begin navigation without needing to enter login credentials.

This must be sent as a separate config in URL launch. It cannot be combined with other configs and it cannot be sent with stops.

Identify the Vehicle and Driver

Each instance of CoPilot needs to know which Vehicle or Driver is using it any given time. CoPilot will update its settings according to the configuration in FleetPortal for the vehicle or driver associated with that instance of CoPilot. CoPilot also uses this vehicle and driver identification to populate reports in the various web tools, including add-on RouteReporter compliance reporting and for tagging driver feedback in the MapSure web tool.

CoPilot offers a wide variety of configuration settings that allow you to customize how the app looks and how certain features behave. With URL launch, the same settings can be deployed for each device when rolling out a deployment to multiple users.

The format below allows you to pass as many configuration settings as you need, all at once.

The Configname parameter can be entered as:

For example, to enable traffic on a device, you can enter either:

The ConfigValue parameter can entered as:

For example, for that same traffic setting above, you can enter either:

You can add a “show confirmation” parameter to your URL if you would like a message displayed in CoPilot that confirms the settings you passed have been successfully configured.

Some configuration settings don’t take effect until CoPilot has been restarted. You can add a restart parameter to your URL to restart CoPilot after a configuration is set.

Available in CoPilot 10.19 and later(Android Only)

A button can be added to the CoPilot user interface that allows the user to return to the application from which CoPilot was launched. Two configuration settings are required to add this button.

To enable the button:

To set which app should be switched to when pressing the button: 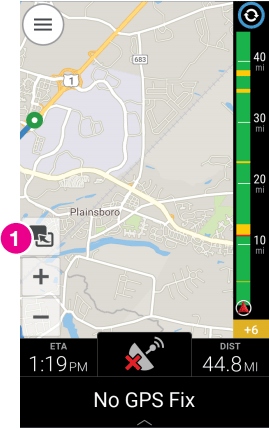 If CoPilot does not have an active trip, you can set the Vehicle Routing Profile that CoPilot uses to generate a safe and legal route.

The profile must be sent as a separate config in URL launch. It cannot be combined with other configs and it cannot be sent with stops.

URL launch can pass a single stop or multiple stops into CoPilot, all at once, to build a full trip. All successfully geocoded stops are shown in the PLAN screen once CoPilot is launched, and driver just needs to tap the green navigate button to get started on his or her route.

The list of stops passed via URL replace any existing stops in CoPilot. Stop location information can be passed into CoPilot in any of the following ways:

The base URL for entering multiple stops is:

There are two parameters available to enter stops:

A stop is entered using the following format:

Each field in a stop is segmented with a “|” (Pipe) and an ampersand (&) is used to separate the stops from each other. In addition, you can add a name field for each stop to help differentiate them.

Note: There is no limit on the number of stops you can pass when sending them in an Android or iOS environment. Some web browsers, however, limit URIs to 2,000 characters. Also, the following characters should not be included in the name of a stop as they are used as delimiters when parsing the “STOP” parameter for a URL.

There are no required fields when passing a location, although we recommend entering as much information as possible to improve location accuracy.

Partial address information can be passed by leaving empty the fields you are not including.

Note: When you pass a latitude and longitude value as well as the street address, CoPilot will prioritize the information provided.

Tip: When passing UK Postcodes, please note they will be used as the sole location for geocoding an address. UK postcodes are simply lat/long points and are a useful tool to quickly geocode an address. As a result, when passing a UK postcode and a lat/long, CoPilot will geocode the postcode not the lat/long. It is not advised that both UK postcode and lat/long coordinates are passed together. We recommend the following:

A single string location query can be sent on its own or in addition to address information.

Combining address information with a single string query can help narrow and improve your results. For example:

In the example above, the search engine will only look for a match to “29 Bloomsbury Square” in the “WC1A 2RP” postal code in the country of “GB” (Great Britain).

A single location is passed via URL with one of three actions:

This format is supported on Android, iOS and Windows platforms. For CoPilot 9, the base URL copilotv9:// can also be used.

Some customers use the http: or https: format to create “clickable” URLs to send to a driver’s device. If a device is running Android 12 or later, you must:

CoPilot also supports the use of the Geo URI scheme on the Android platform. Coordinates as well as an address can be passed in this format. If lat/long is provided, the address is ignored. The exact lat/long should be passed using a decimal place and a comma to separate.

If a GEO URI includes an address in addition to the GPS coordinates of a stop, the address will be used as the stop name label shown in CoPilot.

Adding Your Own Stop Label

You can pass stops into CoPilot using the following Geo URI format: geo:0,0?q=lat,long(label). The label is the name of the stop that will be displayed in CoPilot.

URL launch can be used to set up a device so it can connect to FleetPortal. FleetPortal is a web tool that extends the functionality of CoPilot. It allows fleet managers to remotely configure CoPilot vehicle settings and vehicle routing profiles to be used by the fleet and assign specific routing profiles to vehicle and driver groups within the fleet.

If you are using URL launch and the Account Manager to assign CoPilot licenses to vehicles or drivers, these FleetPortal settings are applied automatically. After activating a CoPilot license via URL, a second call to the FleetPortal URL (below) is not needed.

An exception would be if you are using unique device IDs rather than vehicle or driver IDs to track your licenses in Account Manager. In that case, you would:

Map staging on a device

Trimble Maps partners may want to stage their devices that will be running CoPilot by loading map data before a device’s Account Manager credentials are known. To do this, the Trimble Maps support team creates an API key that allows for the download of the map region for which the partner is licensed. The key is passed via URL using the MapStagingKey config setting.

CoPilot prompts you to confirm the download of a “Map Staging” map set, and it switches to the MyMap screen where you can view the progress of the map download.