Sample App Account Manager APIs - APIs that allow you to manage your CoPilot licenses using the Trimble MAPS Account Manager have been added to our sample applications for React Native and iOS CPIK.

WKWebView Class Support - Our iOS CPIK app now supports the WKWebView class, part of the WebKit framework, to embed web content. WKWebView replaces UIWebView, which has been deprecated by Apple.

Update Screens for Downloads - New screens that read “Processing” and “CoPilot Is Ready!” were added to inform users of progress when downloading map data to an SD card and copying it to the device. To implement these new screens, the following configuration setting is required.

Map Downloads - Updated the MapDataMgr.checkMapUpdate API so that it does not return null when no map data is installed on the device.

Fixed an issue that could cause CoPilot to crash or show an empty Vehicle Routing Profile screen after upgrading to version 10.14, but using older map data.

Fixed an issue that could cause CoPilot to crash on first startup on devices upgraded to Android 10.

Fixed an issue that could cause CoPilot to crash when making a call to the SpeechMgr.SetLanguageAndVoice API.

Fixed an issue that could cause the Current GPS Location to populate twice in the stop list.

Fixed German translations for units of time on the MAP screen.

Fixed an issue that could cause CoPilot to erroneously issue an insufficient storage error message during a map download.

Fixed issues that caused differences in the routes generated by CoPilot versus route generated by web services API calls when stops are located at intersections.

CoPilot Integration Kit (CPIK) and Android Software Development Kit (SDK) licenses can now be assigned, transferred and managed using the Trimble MAPS Account Manager. With SDK, a license can then be activated on the device using URL launch. For CPIK, new APIs have been added to activate CoPilot licenses managed via the Account Manager.

ETA and ETT Enhancements - ETA and ETT calculations were updated to account for Daylight Saving Time (DST) when traveling across time zones.

Better Site Path Visualization - The first-and last-mile paths into and out of a Site have been changed to the color purple to better differentiate them from the rest of the route.

Improved iOS Display - The user interface for iOS devices has been improved to better display CoPilot when the device is turned upside down.

Fixed an issue that could cause CoPilot to suggest an alternate route that goes through a closed road when it is trying to avoid a traffic delay.

Fixed a configuration that was preventing users from disabling the pop-up warning message that appears when Wi-Fi becomes unavailable during a map download.

Fixed an issue that was preventing CoPilot from providing guidance when a vehicle’s starting location or a stop on its route is on a road that is weight restricted, but still allows deliveries.

Fixed an issue that could cause ambiguous voice instructions after passing a stop and heading back to it.

Fixed an issue that could cause inaccurate voice guidance at roundabouts.

Fixed issues causing RouteSync to deviate from the prescribed route in certain situations.

CoPilot routing now takes into account the Ultra Low Emission Zone (ULEZ) in Central London, giving users the option to Avoid the zone completely, unless a stop is located there; always Allow entry into the zone; or Warn when a route will enter the zone. 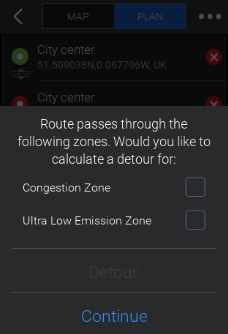 CoPilot can now provide drivers with location notes—details about things such as office hours, parking and rest facilities, where to bring paperwork, or whatever information a fleet finds useful. The notes are created as part of creating a Site around a Custom Place in ContentTools, and drivers can view them at any point before or during a trip by tapping a notepad icon. 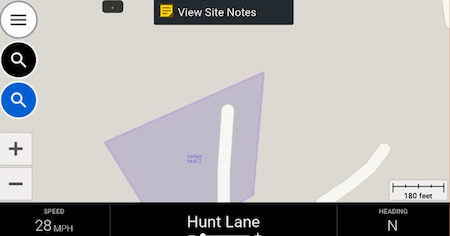 CoPilot now supports the ability to download map updates when they are released between traditional quarterly updates. These additional map updates are noted by version number that ends in “.1” or “.2.”.

New Vehicle Routing Profiles have been added to give fleets more specific choices for preset routing options and vehicle dimensions that CoPilot uses to generate a route. The profiles available vary by worldwide region and your CoPilot licensing. Profiles can also be modified to fit a fleet’s preferences.

Side of Street Optimization

CoPilot’s advanced optimization logic has been enhanced so it can better group together stops on the same side of the street. This helps CoPilot avoid generating routes that send a driver back and forth across a busy road.

A new React Native module has been added to the CoPilot Integration Kit (CPIK). The module allows you to integrate CoPilot into an Android or an iOS app using JavaScript.

App Stores Versions of CoPilot in North America Only

The new Trimble MAPS Account Manager provides an easy way for fleets of all sizes to buy multiple licenses for CoPilot Truck with ActiveTraffic, and install CoPilot on company devices or distribute the app to drivers to install on their own devices. You can create lists of users (either drivers, devices or vehicles), remotely distribute software licenses to those users, and then re-assign your licenses as needed when your devices or staffing change.

App Stores Versions of CoPilot in North America Only

Companies that manage their CoPilot licenses with Account Manager can now use URL launch as a way to authenticate the device and obtain the license. This allows a driver to open CoPilot and begin navigating without ever needing to enter login credentials.

New APIs were added to the CoPilot Integration Kit (CPIK) to provide more information when a user clicks on a map in CoPilot.

Improved Routing to Pedestrian Only Roads

When any stop in a trip is on a vehicle-restricted (pedestrians only) road, CoPilot will now provide a warning, route to the closest road that allows vehicles, and show a path on the map where the driver has to walk to his or her destination. 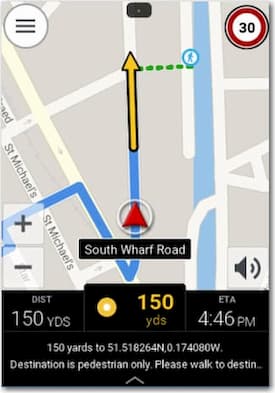 The About CoPilot screen now shows a breakdown of the year and quarter of the map data running on the device.

Low bridge warnings have been enhanced based on feedback that drivers were receiving erroneous warnings. As a result of this improvement, low bridge warning alert messages are now enabled by default.

The RouteListener.onFailedRouteCalculation callback has been updated to provide an error message with a reason for the failure.

ARMv5: CoPilot is no longer supported on devices with ARMv5 (or below) processors.