CoPilot Truck offers a number of enhancements to the standard CoPilot product in order to efficiently route trucks on the most appropriate streets. CoPilot Truck is an additional paid license feature that generates routing based on the vehicle dimensions and load, avoiding unsuitable roads.

The vehicle type affects the type of routing that will be planned by CoPilot. Once you have selected a vehicle type, you can further define the type of vehicle you are driving with settings in the vehicle routing profile. The following Truck vehicle types are available within CoPilot Truck:

Practical routes are the chosen default. This is the recommended option.

In order to find the most appropriate route for your vehicle, CoPilot Truck will take into account four different routing criteria:

*This is entirely based upon the information within the map database. It is therefore possible that some roads may not be marked as restricted within the database and would therefore be open to guidance. If the destination is within a restricted road then CoPilot will route you onto the restricted road.

Below are the restriction icons shown within CoPilot:

CoPilot also adds additional costs to left/right turns (varying to favor the side of the road being driven in a particular country) as well as significant costs on U-turns and sharp turns, to avoid these where possible.

CoPilot Truck routing is based upon the specific vehicle being driven. There are many shapes, sizes and weights of trucks, carrying many different and sometimes dangerous loads. To find the most appropriate routing, CoPilot needs to know the details of the vehicle actually being driven.

With this information, CoPilot will avoid any roads that are not suitable for the vehicle, only providing a route on roads that do not exceed the maximum allowed values.

The CoPilot Hazardous Materials (Hazmat) categories vary depending on the map data present on the device. Users are only able to select one category. If your vehicle contains multiple materials that are both Explosive and Harmful to Water, select General.

The United Nations Economic Commission for Europe (UNECE) set out the European Agreement concerning the International Carriage of Dangerous Goods by Road (ADR). Within this agreement, tunnel codes are defined outlining the different categories of tunnels as well as load categories. Further details of these categories can be found on the UNECE website.

Four options are available within CoPilot for the different prohibited tunnel categories: 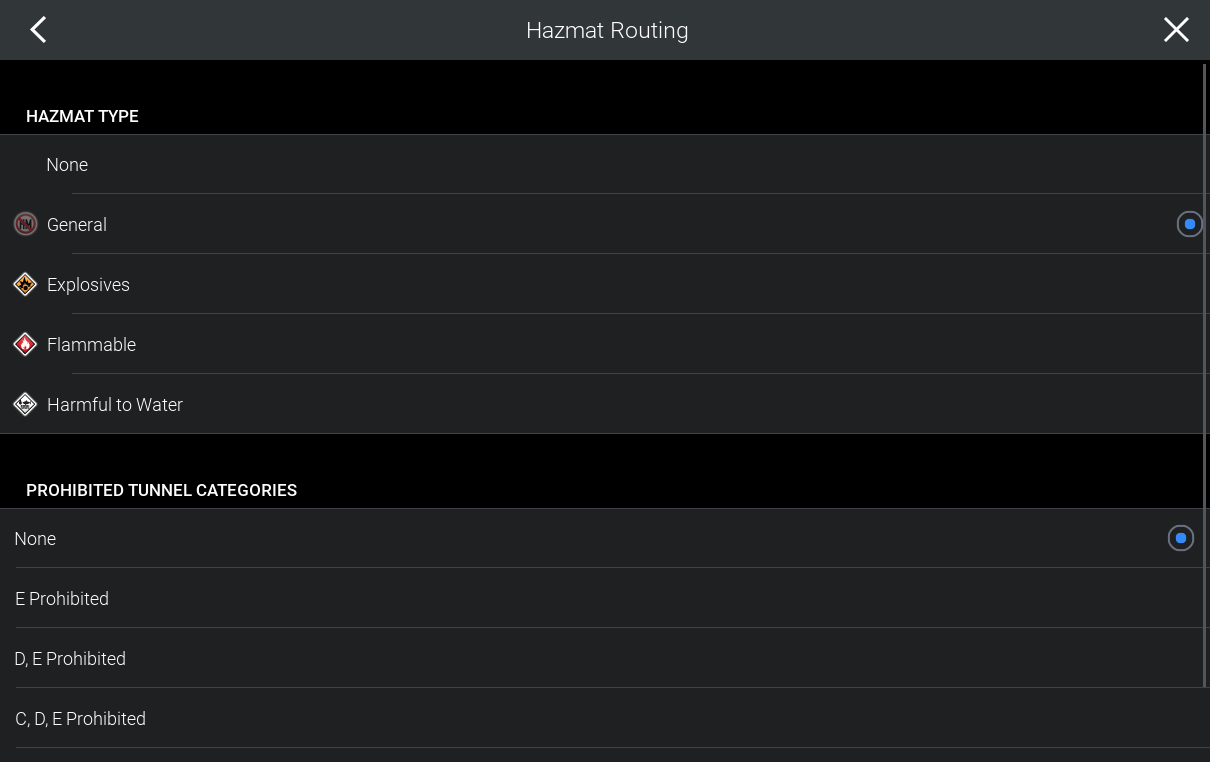 Destination on a Restricted Road

There may be instances where a destination is set to a road that has either a physical or a legal restriction. CoPilot, will successfully geocode the address and calculate the route. When looking to navigate to the destination the behavior of CoPilot will depend on the restrictions that are in place at the destination.

Note: CoPilot will never include a road on a route with a restriction that conflicts with the truck routing profile.

If a destination is entered for a road that is restricted for trucks, but allows deliveries. CoPilot will navigate to this road as it assumes the driver is on a delivery. Once it reaches the destination, CoPilot will notify the user they are on a restricted road. No further guidance will be provided until CoPilot detects the user has navigated to a legal road.

If this option is checked, the calculated trip will ignore international boundaries when necessary to generate the best route. If this option is not checked, the calculated trip will never cross international boundaries. For example, if all your stops are in the United States, the route will stay in the U.S. even though the most practical or shortest route would involve some Canadian mileage.

The National Network is a U.S. government-designated system of highways originally established by the Surface Transportation Assistance Act of 1982 (STAA). This routing option is based on the federally-designated National Network system updated in the April, 1992 Code of Federal Regulations, Part 658, Appendix A.

These designated highways permit, at a minimum, 102-inch wide, single 48-foot trailers and 28-foot double trailers. The interstate system and most, but not all, remaining designated routes are open to 80,000 pound vehicles. Certain states, notably Arkansas and Mississippi, have designated certain National Network segments with less than an 80,000-pound capacity. In addition to the National Network highways, access routes and access policies are components of routing STAA dimensioned trucks. The federal government has mandated that no state may prohibit travel from the National Network for a minimum of one road mile unless safety restrictions apply. Additionally, no state may deny reasonable access to terminals and facilities for food, fuel, repairs, and rest.

Several states maintain more generous access policies and lists of specifically designated access routes to terminals and facilities. (For detailed information about pre-approved access routes, contact the individual states.) Should you need to travel beyond the National Network and the access roads, you must acquire the proper permit.

Because every mile equals money, CoPilot offers enhanced routing specifically for 53foot’/102inch” trailers. The calculations for these routes are based on National Network routing, with the addition of roads that permit 53-foot/102-inch trailers.

CoPilot Truck has introduced a Truck Warning function (European region only). Based upon attributes within the map database, CoPilot can be configured to provide the driver with audio and visual warnings ahead of dangerous areas or turns. CoPilot will look ahead on the current route for any known dangers. If danger is detected, it will display the respective symbol with a distance countdown on the guidance screen as well as an audio warning. The distance to the warning can be configured to suit the driver or vehicle to ensure the warning is provided with enough time for the driver to adhere.

Warning icons and their meaning:

When available in the map data CoPilot can display the current road speed limit, in the top right hand corner of the navigation screen.

Note: Some road class types have lower speed limits for trucks, if known, CoPilot Truck will also display the speed limit specific to a truck.