We can see from our analytics stats that not all of our users are visiting from devices with fast internet connections so it’s important to optimize the loading times for everyone.

In this article I’ll cover the different types of assets used on the site and what we did to optimize the performance. 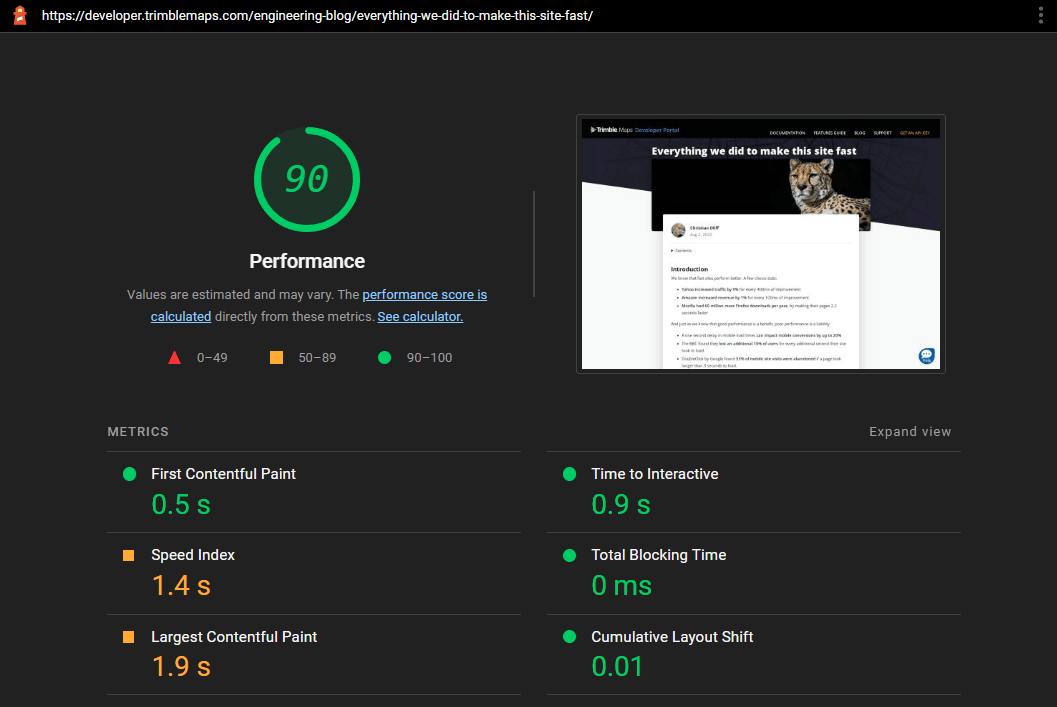 The site uses the open source Open Sans font throughout. We self-host the WOFF2 fonts instead of using Google Fonts CDN to avoid the additional TLS/DNS round-trip associated with Google Fonts.

We use Bootstrap to build our site’s CSS. It’s minified at build-time and PostCSS is used with Autoprefixer and the excellent PurgeCSS which does a great job scanning all of the generated webpages and removing all the CSS rules which are not used.

This makes a huge difference to the file-size of the generated output, typically reducing the size by more than 50%.

All images are losslessly optimized. We use Squoosh for bitmap images and SVGOMG site to minify the SVG files.

We also use native lazy loading so that all images ‘below the fold’ are not loaded until a visitor scrolls near them. Some pages are long so this can save the users bandwidth by not downloading images they may not see.

Where possible we always specify the images height and width to reduce content layout shifting (CLS).

Icons, logos and diagrams are all SVG where possible.

Where possible we self-host all JavaScript libraries as it’s always best to self-host your static assets. Scripts which are not needed to render the page are loaded with the async attribute and analytics tracking scripts use the new fetchpriority="low" attribute to ensure they aren’t competing for bandwidth with JavaScript used to render the page.

We make use of a few third-party widgets and found that they were negatively affecting performance - in some cases substantially.

The Freshdesk chat support widget was loading a huge amount of JavaScript on every page-load - even when it wasn’t used - so after being inspired by the YouTube Lite Embed facade by Paul Irish at Google I set about creating a Freshdesk Messaging Facade. I’ve added a number of improvements since the initial release and pleased to see it added to Third Party Web and Google have since added this as a recommended facade in Lighthouse.

Using this reduced the amount of JavaScript this widget needed on page load from 1097 KB to just 1 KB. When a visitor hovers within 100 pixels of the widget in the bottom-left it’ll begin to load. It is loaded with a low priority with the fetchpriority="low" attribute.

The site is hosted on Netlify Edge CDN which has blazing-fast performance as standard. Static assets are cached for 1 year with a custom configration in the netlify.toml.

We use the static site generator Hugo to build the site which has great minification options baked right-in.

We use this in our Hugo site’s config.yml:

We regularly make use of a range of performance testing tools:

There’s a few things we’d still like to improve with the site’s performance.

We hope you’ve found this post useful and given you some ideas on how to improve your site performance metrics.

How We Improved the Performance of Our Vector Maps

The changes we made to give our customers a better experience with our vector maps.

How We Cleaned Up Our Big Git Repo

A step-by-step guide to how Trimble Maps reduced the size of its code repository after transitioning to Git from Subversion.

How We Converted a Huge SVN Repo to Git

A step-by-step guide to how Trimble Maps transitioned its code repo to Git from Subversion.